Lessons from an Advocacy Campaign on Twitter – The #losethecig Case Study

Two and a half weeks, a unique advocacy campaign on Twitter came to a successful close. The #losethecig campaign – an effort that started off innocently enough with a simple tweet – generated more than 500 individual posts encouraging Supercool Creative, a Los Angeles marketing firm, to change its corporate logo and online avatar. It also represented the first anti-smoking campaign on Twitter and an important litmus test for future online advocacy efforts. Below, I summarize the campaign and note many of the lessons learned from the experience.

The #losethecig campaign started off with a simple note posted on Twitter by Gary Ploski (@garyploski on Twitter) to Supercool stating that its logo of a superhero smoking a cigarette was actually not cool. The agency’s social media strategist, William Chamberlain, challenged management on this point, which agreed to make the change but on one condition: “If Supercool Creative gets 500 tweets telling us the logo is no good we’ll change it… on our business cards, letterhead, websites, social networking sites… everything.”

So, Gary launched the first anti-smoking advocacy campaign on Twitter to generate 500 unique retweets (reposts of content on Twitter) targeted at @SupercoolAgency with the hashtag #losethecig. Both Gary and William have expansive posts on the campaign (see resources below).

Gary’s post to Supercool represents one small effort in the ongoing battle to deglamorize tobacco use and reduce teen smoking rates. These efforts – notably the truth® campaign  run by the American Legacy Foundation (where I worked from 2000 – 2007) – have focused on countering tobacco industry advertising (a.k.a., counter-marketing) and images in movies, magazines and other media that try to portray smoking as cool and sexy. Tobacco use represents an ongoing public health crisis: it is the single largest cause of preventable death domestically, with 1,200 people dying every day of an illness attributable to smoking (per American Legacy Foundation’s Prevention Factsheet).  Nearly 80% of smokers having their first cigarette before the age of 18 and one in three youth smokers are projected to die prematurely from tobacco-related disease (per American Legacy Foundation’s Youth Media Campaign Factsheet). The opportunity to thwart an image depicting smoking as cool, even if it was somewhat marginal in the larger tobacco control efforts, was important enough to energize anti-tobacco use advocates online.

The advocacy campaign has several unique characteristics. First, it was confined to Twitter only. In most situations, an online advocacy campaign would involve multiple approaches including email, listservs, and platforms like Facebook and Twitter. Limiting it to Twitter only, though, provided some interesting insights into how to use that platform more effectively as well as its limitations.

Second, Supercool Creative was a somewhat willing partner in the campaign.  While the campaign involved a call to action (i.e., public appeals for people to take a specific step to support the campaign’s goals), it was one structured around generating 500 individual tweets. Admittedly, the marketing agency could have just simply made the decision to change its logo when pressed to do so publically. One could argue that it could have generated even more attention and public good will by simply making and trumpeting the logo change. In fact, the strategy it adopted did rub some people the wrong way. Nevertheless, it established a competition-like environment for the campaign that changed the tenor from a “if we succeed” to a “when we succeed” group mentality.

Last, it involved a simple call to action instead of a confusing menu of possibilities and a finite window of time. Twitter posts during the campaign simply requested people to retweet “@supercoolagency #losethecig”. The majority of the online activity took place during a 10-day window and once the 500 number was reached, the campaign came to a close with a flourish of thank you posts.

The campaign started slowly (see chart below; an important point – the data tracking #losethecig comes from the transcript function on What the Hashtag, but it does not capture the earliest posts, which I had to manually discover). Gary tapped into in his Twitter network, but without a strong connection to anti-smoking advocates, the number of campaign tweets were low. A key initial advocate was Path for the Blue Eye, an online initiative “designed to foster greater collaboration and knowledge sharing among health marketing communications professionals.” Its early post on April 27th helped bring attention to the campaign as did a post by Free & Clear (an online service helping people quit smoking) on May 3rd. Both blog posts were sparked by Gary who reached out to them about the campaign. In total, about 90 tweets were posted in the first two weeks.

I learned of the campaign on May 10th through a very random posting on a baseball-related online community. I honestly don’t think I would have found the campaign until much later if that had not happened. I posted a notice on a global tobacco control listserv (GLOBALink) that day and connected online with a few well-placed tobacco control advocates. From there, things really took off. 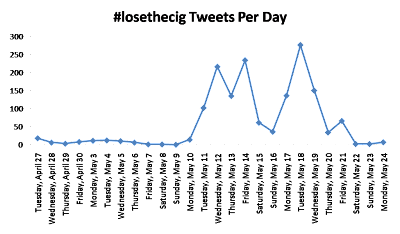 In a single day – May 11th – the campaign generated more tweets than the combined total from the previous two weeks. Important tobacco control advocates such as Scout (@scoutout), Director of the National LGBT Tobacco Control Network, and Cristine Delnevo (@lozzola), Director of the Center for Tobacco Surveillance and Evaluation Research at University of Medicine and Dentistry of New Jersey, were at the forefront of calling on people to retweet the campaign message. A May 12th blog post by Scout, who heard about the campaign through a contact at the Centers for Disease Control and Prevention, helped frame the campaign in health terms and provided the background story needed to educate advocates about the effort. Gary added his own post with an imbedded Google spreadsheet to track the individuals Twitter users who had posted the campaign message.

Through a concerted effort, perseverance, outreach to Twitter users with larger follower numbers, and ongoing efforts to maintain momentum the campaign generated its 500th unique campaign tweet by May 19th.  The following day Supercool Creative pulled down its smoking superhero Twitter avatar and started its transition to a new logo.

Most online advocacy efforts would not simply be limited to Twitter. The basis of the campaign, though, did provide for an interesting laboratory and some lessons.

Avoid jargon: one of my initial posts asked for help in identifying past health-related counter-marketing efforts on Twitter. It made perfect sense to me.  But in a public forum like Twitter where nearly all of the audience does not have tobacco control experience, this made no sense at all. Successful Twitter campaigns need to avoid jargon and confusing terms that will make it more difficult for people to take action.

Timing: Twitter is a constant moving river of information and opinions, but there’s a definitive ebb and flow to its content. The campaign generated its most visibility between Tuesdays and Fridays (see chart below). The weekends were much quieter with less campaign activity. In general, for a campaign to continue to operate over a period of time longer than a week, the activists involved will need drum up new attention at the beginning of the work week. 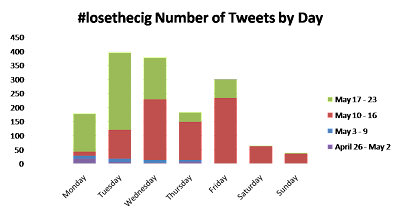 The timing of posts are also critical – most of the effective posts that generated retweets happened during definitive time-frames (see chart below). The early work hours (9 to 12AM) and end of the day work hours (3 to 5PM) represented the times that generated the most activities. In an effort focused on multiple time zones, those time bands also complimented each other; for instance, the 11AM – 1PM EDT time slot coincided with the begining of my work day in the PDT time zone. (For those of you wondering about the 11PM EDT jump, that’s mostly Gary posting tweets to encourage people to take action.)

Hashtags: the use of the #losethecig hashtag made it much easier for all involved to actually track campaign posts and encourage further action. Without that, the campaign would have had a harder time being noticed in the flow of Twitter posts.

Action alerts: unlike email action alerts, where one can send out one message to subscribers, generating action alerts on Twitter are much more challenging. In an ideal scenario, I would now have a Twitter list of health advocates that I can send a call to action to simultaneously. In reality, I would need to either send direct messages or post tweets to specific users (which is what Gary ended up doing at 11PM at night).

Use blogs to support Twitter campaign activities: 140 characters are not enough to explain a campaign’s efforts. The blog backgrounds posted by Scout and Gary helped provide resource backgrounds for Twitter advocates to point to as they were posting requests for additional people to retweet the campaign message. The blogs also helped raise the visibility of the campaign outside of the Twitter universe. Blog attention helps drive traffic

Ask for support from Twitter users with large follower numbers but don’t expect tremendous results: the campaign got support from several personalities with large follower numbers. However, their participation did not generate an avalanche of retweets in support of the campaign. In many instances, those Twitter users also post a tremendous amount of tweets on a daily basis. Standing out in their individual Twitter streams was difficult and as such, we had equal success in generating retweets by people more connected with their smaller follower base. All that said, if a major personality had been leading the effort, the campaign result may have been achieved much more quickly.

A Twitter campaign needs a strong advocate: much like grassroots advocacy campaigns outside of Twitter, the #losethecig campaign succeeded because of Gary’s ongoing and tireless advocacy efforts. When the campaign first launched, Gary reached out to about 50 anti-smoking and health-related blogs with a summary of the cause. He kept up the ongoing call to action after the first week of ramping up the campaign and made sure to connect with each and every one of the Twitter users who participated in it, even if it was simply to ask them to repost the campaign message a second time. His energy and perseverance provided the encouragement for others to participate and win the campaign.